Posted on February 9, 2012 by thedixiewolverine

No, I’m not homesick.

It’s been 2 years since Up on the Ridge, so I’ve been anxiously awaiting this album that came out on Tuesday the 7th. “Am I the Only One” and the title track “Home” were released in March and November respectively of last year. “Am I the Only One” was a #1 hit and also went Gold. I’m sure “Home” isn’t too far behind.

I figured I would show more of my Dixie side (as you can tell by now) and just give a quick song-by-song review. : ]

1. Am I the Only One – such a fun song! All his buddies have excuses for why they can’t go out one Friday night. This will definitely put you in a good mood. The music video is great too! Check it out here: http://www.youtube.com/watch?v=Bkzp7Gp2kEU&ob=av2e

2. Gonna Die Young – Dierks is great at his lyrical analogies. This chick is definitely a showstopper who’s destined to make him die young. If I’m not mistaken this song was co-written with Eric Paslay.

3. Tip It On Back – The more I listen to this album, the more this song becomes my favorite. It’s sort of a drinking song, but it’s more mellow with a lot of steel guitar and has a more relaxing vibe than Eric Church’s “Drink In My Hand.”

4. Home – All I can say is this one of the best “America” songs that’s been produced (sorry, Toby Keith). If we ever changed our national anthem, we would have to change it to “Home.” Another great music vid: http://www.youtube.com/watch?v=wSJoZiB-UGY&ob=av2e

5. Diamonds Make Babies – Dierks’ warning to his soon-to-be-engaged guy fans that that little (or large) diamond is gonna lead to babies -> mommas -> mommas making the daddies change their ways.

6. In My Head – This song reminds me a lot of a Luke Bryan song. It’s about the feeling of still having the ex-girlfriend around even when she’s moved on.

7. Breath You In – Dierks has had some AMAZING love songs (Come a Little Closer, Draw Me a Map, I Wanna Make You Close Your Eyes, etc.), and this is no exception. Just listen to it. My words can’t do it justice.

8. The Woods – Somewhat reminiscent of “Up on the Ridge.” Talking about a hangout he and his buddies have spent a lot of time in (a spot in the woods).

9. When You Gonna Come Around – Great duet with Karen Fairchild from Little Big Town about when a relationship is going to make steps forward.

10. 5-1-5-0 – Ok, I’ve had this song stuck in my head for a couple days now. It’s really catchy and fun. Once again, this girl is hot enough that you’re gonna have to call the po-po since Dierks is going crazy for her.

11. Heart of a Lonely Girl – This song references the wives of those who are out on the road and get lonely when their husbands are out on tour. “The hurtenest thing in the whole wide world is the heart of a lonely girl.”

12. Thinking of You – I tweeted @DierksBentley that this was my early favorite (you can see his reply here:https://twitter.com/#!/DierksBentley/status/166918851949379585 : D made my day). It’s one of the sweetest of his tracks on the album. As far as I can tell it was written to his daughter, Evie. She actually sings the chorus if you listen all the way to the end. She performed it with him at his Ryman show earlier this week that you can find on YouTube. I’m absolutely floored by this song.

Sorry this was super long, but I’m going to try to post more regularly. I basically just had this album on repeat all day Tuesday, and I thought I’d have a go at album reviewing. Thanks y’all! : ]

Posted on January 31, 2012 by thedixiewolverine

So apparently, I still have blog. Oops! First semester came and went…clearly. Second semester is starting, so we’ll see how that goes.

Anyways, something got my goat today. It’s this poster that I keep seeing on Pinterest, and since I’m studying to be a Registered Dietitian, I got a little peeved after reading this thing.

but are they really?

First of all, I agree with the refined flours and liquid carbohydrates contributing to fat gain.   We as Americans are so into processed food it’s disgusting.  Our bodies were not created to digest chemicals and preservatives.  The starches’ being in that section I don’t quite agree with. Potatoes and corn are complex carbohydrates…which, in essence, means they’re broken down in your body more slowly.

*sigh* Then, they HAD to mention the Atkins Diet. Anyone who knows extremely well (which is a pretty small number, so feel privileged) knows that I hate the Atkins Diet.  The statistics might be correct, but those who have attempted the Atkins Diet have had increased heart disease and atherosclerosis (hardening of the arteries).  That’s what fat does to your body.

Yes, excess carbs are stored as fat, but you can’t go on eating as much fat and protein as you want.  Your brain REQUIRES glucose in order to function.  All carbohydrates are broken down in your body to become glucose, so the type of sugar you eat doesn’t exactly matter. What matters is the calorie load that is associated with that sugar.  Refined sugars and carbohydrates are commonly used in foods with high calorie contents.

What’s the moral of the story? Keep eating carbs!!! Your brain will thank you. There’s a reason that most everything we eat is made of carbohydrates (that’s where you get energy by the way). Limit processed food, be mindful of how many cookies have found their way into your stomach, and use whole grain or whole wheat products when possible.

Posted on August 16, 2011 by thedixiewolverine

It’s been 4 days since I moved in. I will say, it’s gone by reeeeaaaalllyyyy slowly. (For all you future college students, orientation is the most boring part of this whole thing) I won’t lie, I skipped out on some stuff, and I’m sure there’s somewhere I’m supposed to be…but obviously, I’m not! ; ]

I’ve met soooo many new people! It’s been a lot of fun! There’s Kevin, Taylor, Savannah, Delaine, Kaelin, Chris, Emily, Diane, Sarah, and a ton of others! Plus it’s been great to see all my friends from church and both high schools I went to. Unfortunately, I haven’t really met my suitemates except for when one of them told me she was going to close my door to the bathroom so she could take a shower. That has been the extent of our conversation. Maybe they’ll be in one of my classes or something. I only know their names because they’re on the door. Regina and Kristi. Not sure which one I “met.”

My room is pretty nice! Its got a good amount of floor space for a dorm. My loft bed makes a nice little chill spot, which is where I am right now. : ] 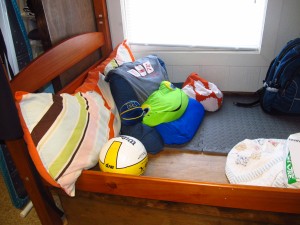 Fortunately, my ethernet cord just reaches the inside. (Yea, that’s right…NO wireless : ( didn’t know that till after I moved in.) I currently have 4 cords plugged into my dear old laptop. 1) ethernet 2) printer (since I have no wireless, I can’t wireless-ly print) 3) battery (i ordered a new one yesterday) 4) camera so I can upload pics.

All in all, I’d say it’s been great so far! I have to make a WalMart run for some stuff, do some laundry, and have a little volleyball coaching session with my friend Katie. Until next time, y’all!

The Fun Is Just Beginning

Posted on August 12, 2011 by thedixiewolverine

It’s hard to believe that in about 9 hours, I’ll officially be a college student. I’ll live in a dorm, be almost completely independent, and have TONS of freedom. To be honest, it’s a little scary, but I’m totally excited! I’ve got most of my stuff packed up in my car (who will now be referred to as “Hank”), a new job I’m starting next week, and a roommate to meet in the morning! Funny story about her, actually. I was told that my roommate’s name was Alexandria, but unfortunately I was not provided with contact information. After a few phone calls, voice mails, and emails I was informed that “Alexandria” was not my roommate. Well, that’s just peachy, I thought. I did finally found out that my real roommate is named Lynzie. : ] I’m rather anxious to meet her! She seems pretty chill and laid back like me, and I’m sure she will be mentioned quite a few times here (I am living with her after all!).

I’m sure some of you are rather confused by the name of this blog, so I’ll break it down for you!

The – a definite article, used to indicate that the following noun is unique

Dixie – I’m a country girl. A Carolina girl, actually. And that’s South Carolina, not North. But no, I’m not a Cocks fan. Go Tigers! C-L-E-M-S-OOOO-N! 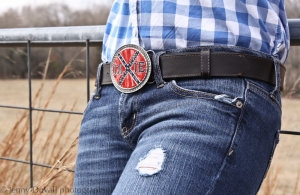 I have the belt buckle to prove it!

Wolverine – As much as I am a “Yankees go home!” type of girl, my love for the Michigan Wolverines cannot be shaken. It’s something my daddy instilled in me, and I intend to pass it on to my kids (granted I have them.. pets will suffice too).

See, that wasn’t that hard, now was it? ; ] Well folks, I have an early morning ahead of me, and I probably should get some sleep. Wish me luck!!